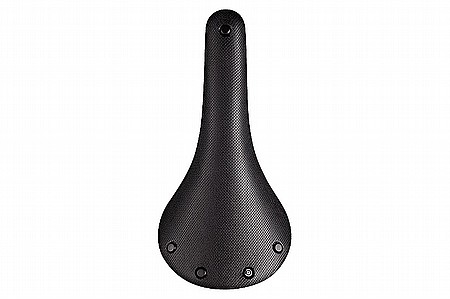 This saddle is supercomfortable, light, weatherproof, easy to dial in as its profile is uncomplicated. I use it for commuting but wouldnt hesitate to ride all day with it. Plus, did you notice its a Brooks?

Was this review useful to you? Yes/No
Thank you for your feedback.
Overrated

I've read all the great things about this saddle since Brooks strategically leaked it was about to be released, some 10-15 years ago(?), and wanted one every since. Now that I finally own one and have used it for a couple hundred miles, I have to say, for me, it's quite overrated.

First and foremost, it's not as comfortable as claimed. I come back from hour+ rides sore, bordering on numb in the nether regions -- not the stuff of bragging rights for any saddle. When I decided to swap it out for another saddle I had, I was surprised at how heavy, bulky it felt in my hand. Again, not optimal.

In sum, I don't, can't recommend this thing, suggesting instead saddles with center cut-outs to better protect the plumbing bits.

Was this review useful to you? Yes/No
Thank you for your feedback.
Perfect addition for my vintage 1984 Club Fuji.

I purchased the Brooks C13 Cambium saddle to replace the original Vetta saddle on my 1984 Club Fuji. Couldn't be happier with my choice. Not only does it look great, but I found it to be comfortable right out of the box. I definitely recommend this saddle.

Was this review useful to you? Yes/No
Thank you for your feedback.
So good I want more

This saddle just fits me in the 145. The flex is awesome. Sit bone support if perfect. The cover is a little weird. Kinda grabby. But as I ride it more, it seems to be wearing in. Saddles are personal, but for me. This might be perfect.

Was this review useful to you? Yes/No
Thank you for your feedback.
Awesome

by Anonymous
seattle area
3 of 3 customers found this review helpful.

Great seat! After years of searching for the perfect seat I finally found it with the C13.

Want to save on all your Western Bikeworks purchases? Sign up here for exclusive discount offers. 58