The Chico Stage Race is one of the largest stage races on USA Cycling's early spring calendar. These bike races consist of multiple stages held consecutively over a period of days. The rider with the lowest cumulative time of completion is the overall winner, but there are opportunities to win individual stages as well.

While the race attracts numerous professional teams from across the country, the amateur ranks are filled with well-known local riders. After a satisfying winter of training, I was excited to put my legs to the test on California roads. I wasn't alone in itching to get out of town, and was able to snag a spot with a group from Oregon making the trek south. We loaded up our bikes and gear at dawn and headed down to our host house.

We arrived with plenty of daylight to spare, threw on our kits, and hit the roads for a quick spin to shake out our legs. Our route toured the almond tree farms that encircled the city of Chico, and gave us a taste of what the wind conditions might feel like the next day. After a solid hour of riding, we decided to try some of the local fare. Our hosts recommended a Jamaican spot just down the road, and it was truly delightful. Next time you're passing through Chico, visit Sipho's Jamaica--you'll love it!

Our race was the last to start on Friday afternoon. Stage One took place at the Thunderhill Raceway, an auto racetrack on the west side of town. The course was incredibly smooth and fast, with about 200 feet of elevation gained each lap. We were all a little nervous as this was the first race of the season for those of us from the Northwest. We lined up en masse and waited to start the race. The pace was fast right from the start, and riders were attacking left and right. Weary of splits and time gaps that might materialize on the challenging course, I positioned myself at the front following moves and countering attacks. After a few blistering attacks had been pacified by the field, a few riders made their move and broke clear. I battled for a good position for the sprint, but couldn't find it in the final lap. I felt satisfied and happy to have kept the rubber right side up.

The second stage was more daunting--a 90 mile road race around the rural roads of Paskenta, west of Chico. The Paskenta Road Race was notorious for its 4 mile gravel section within range of the finish line. We would have to race 45 mile laps twice, including the gravel and 2 miles of potholed road leading up to it. I'd mounted up a pair of 28mm Schwalbe Pro One Tubeless tires with the hope that it would spare me from any mechanicals. A flat tire on this course would spell the end of my race.

Our roll-out was 8:45 am, and not a minute later we were on the road headed out. A few riders attempted a breakaway every now and then, but there were strong teams that kept the race from splitting apart. I tried to relax and stay out of the wind, knowing that the gravel section would require a substantial effort. The rolling hills of the valley were a gorgeous backdrop to behold as the day progressed.

As we approached the gravel section for the first time, the battle for positions intensified. The sound of carbon bouncing over the potholed road was deafening, and many of the riders suffered mechanicals and flat tires as they fought to get to the front. Luckily, my tubeless setup allowed me to roll over the rough road without the risk of pinching a tube. By the time we reached the gravel, it felt like a welcome relief. 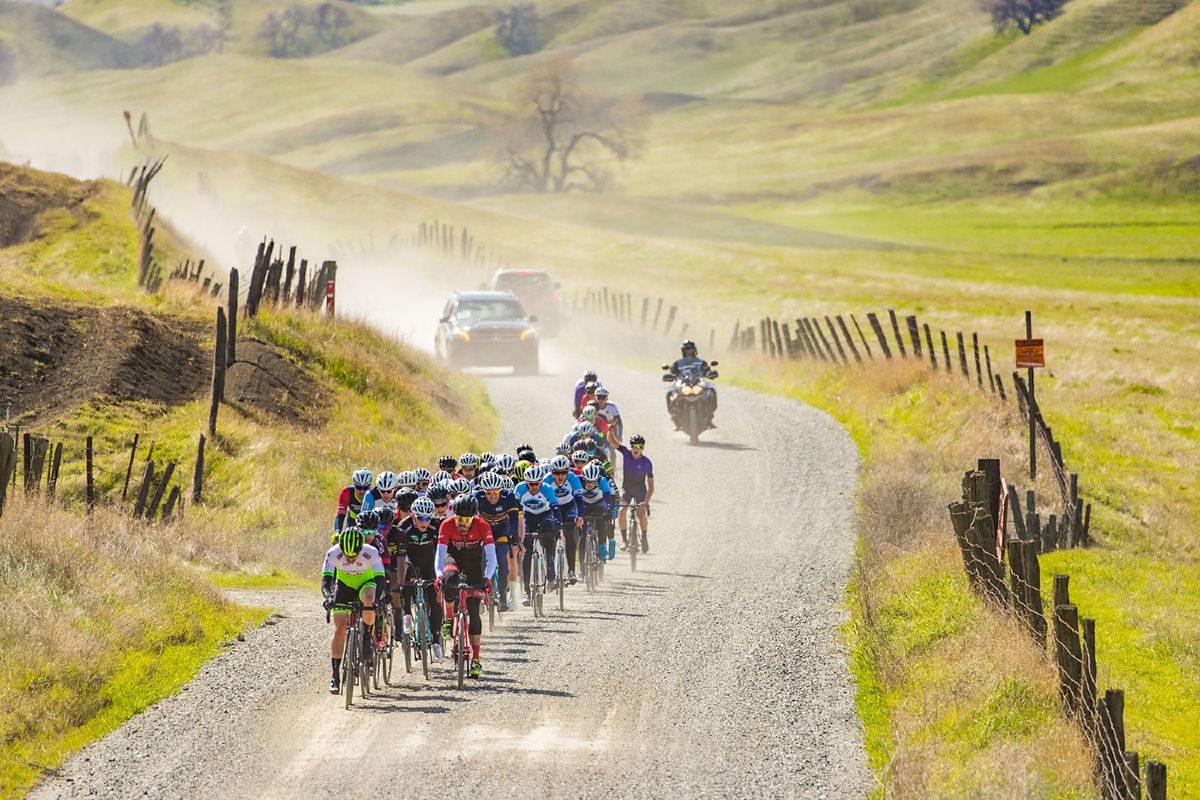 We exited the gravel onto a paved climb, followed by a quick descent into the finish. After the first pass, we lost between 20-30 riders off the back. I couldn't believe I'd made it through without any issues, and tried to stay at the front as breakaway attempts persisted. A massive crash on the backside of the course created a split that reduced the field to about 40 riders going into the gravel for the final time. I fought hard with everything I had to stay in contact with the peloton.

As the sprint approached, I pounced and smashed off the front without warning. I looked back to see a surprisingly large gap and drilled it with everything I had left. The finish line loomed ahead of me as my legs burned and the speed with which they cranked the pedals waned. At 250 meters to the line, the field surged around me and I was engulfed by the sprint. I'd rolled the dice when the odds favored the bold, but I didn't have enough to take the win. I was now 25th on the Overall General Classification.

Emboldened by the road race, I wanted to take time back on Stage Three. This was an individual time trial, a discipline that I love. I'd ridden a great time trial the week prior at a local event that featured a somewhat longer course with freshly dialed equipment, and I knew I could produce a good ride. I allowed myself a long warm-up to prepare my legs and get the blood flowing. The course was flat and fast along the Chico River and back, with a couple of rises in the middle section. Determined to do my best, I set my target speed for a 28 mph average across the 10 mile course.

With the countdown, I was out of the starting gate and tucked in the aero bars rolling at 28 mph between the almond tree farms. I reached the first turn and took it hard, unwilling to relent any speed. Riding along the winding river road, I began to lose pace and my speed dropped. I focused on my breathing to relax my core, allowing better power output. I took the last turn back toward town with perfect form and powered back up to 27 mph. I pushed through the pain, gave it all across the line, and collapsed on the sidewalk.

I didn't know the results until after I'd warmed down on the trainer at the host house. My finish in the time trial was 12th, moving my GC position to 12th overall. I couldn't help but laugh in amazement. For a moment I entertained the thought of what it would take to crack the top 10. I'd need to win the crit in order to move into anything higher than 8th place overall. This wasn't out of reach, but it would be difficult without teammates.

The crit took place in downtown Chico's bustling streets filled with spectators cheering the racers on. I felt surprisingly at ease lining up for what would arguably be the most dangerous stage of the race. The race began fast with riders rolling off the front consistently, but the team of the current GC leader patrolled the front. It seemed as if the race was destined for a field sprint. At three laps to go, I made some hard digs of the pedal to move up toward the front. At two laps to go, I was in perfect position to smash the last lap and sprint for the line. Chaos ensued as riders fought for the front. My lines were compromised and I was blocked out of the sprint.

While my result in the crit was a disappointment, I was pleased with my 12th place overall in the Cat 2 race. I'd made the trip down to Chico with no expectations and felt proud walking away with a respectable finish in a seasoned peloton.

Want to save on all your Western Bikeworks purchases? Sign up here for exclusive discount offers. 81